Several methods of treatment are available from our Engineering department, for specific projects. Selection of the most effective method depends on the water analyses, treated flow, and other local conditions as specified in our Questionnaire.

In the past, the usual Public Health stand was more-less where there are two or more people drinking from the same source, it has to be chlorinated. Finally, this attitude is changing thanks to greater awareness of the health hazards associated with the use of Chlorine to disinfect drinking water – see the Chlorine section at www.the-ozone-store.com . While drinking water should be free from disease causing pathogens, it should also be free from disease causing chemicals.

In order to assure disease free drinking water, the U.S. EPA finalized (in June 1989) a set of procedures for community water treatment systems called: SURFACE WATER TREATMENT RULE (SWTR). Although the laws covering this SWTR are not compulsory in other countries, there are advantages to using the data accumulated in the United States where more money is available for research. In principle:

1. All water supplies obtained from surface water, or ground water under the direct influence of surface water, must be disinfected to remove or inactivate Giardia Lambda, and Cryptosporidium at least 99.9% (3 Log) and viruses to at least 99.99% (4 Log).

2. In conjunction with proper filtration the level of further disinfection may be reduced to 0.5 Log.

3. Inherent in the rules for disinfection are the CT tables. CT constant describes the time required for disinfection to certain levels at given parameters of pH, temperature, concentration of a particular disinfectant, and its contact time. For instance:


Chlorine and Ozone have served communities for nearly a century. 100 years ago ozone was too expensive and the ozone generation equipment not very reliable. At that time chlorine was cheap and its side effects unknown. Yet, because of chlorine's bad taste, and because of its terrible reputation as a WWI poison gas, after WWII ozone was already favored by many European cities. Today technology has made ozone generators relatively inexpensive and reliable.

It has been concluded in many studies that heart disease, cancer, and asthma are directly linked to the disinfectant by-products called TRIHALOMETHANES (THMs) and Halo-Acetic Acids. As 1000s of kinds of organic molecules may be present in water, there are also 1000s of Chloro-organics THM by-products formed when these organics react with chlorine. Each of them ever tested shows carcinogenic effects. The ultimate choice is Ozone.

When in contact with any organic molecule Ozone will start oxidizing by attacking the carbon-hydrogen bonds, and will continue on through a chain of reactions ending off with harmless CO2 gas (Carbon Dioxide). The actual Ozone system design is based on the water tests and on the existing hydraulics layout.

Water source may also contain inorganic oxidable compounds such as Iron, Manganese, Sulfur, Arsenic…. All of them can be removed with Ozone directly, or in combination with filtration. Once all contaminants have been eliminated, residual Ozone reacts with any microorganism (bacteria, virus, or fungus), destroying by rupturing the cell membrane. Ozonation also adds dissolved oxygen to the water supply. In many countries, 10 mg/l of oxygen is required to meet drinking water quality standards.

Typical surface water contains organic compounds which result mainly from the decay of vegetative matter. These organic compounds are mostly in the form of Humic and Fulvic acids. Removal of organic compounds by precipitation requires low doses of Ozone in the presence of polyvalent metal ions such as Calcium, Iron, & Aluminum. The oxidation process leads to compounds with organic acids on either end of the molecules. These further react with the metal ion and form flocks that can be filtered out. This process will remove 50-85% of the organic contamination. After filtration the water is again subjected to Ozone in order to kill the remaining pathogens which may be present.

After ozonation, the treated water is passed through a filter. Even if it is necessary (in larger distribution systems) to chlorinate, this organics-free water would require only about 0.2 ppm of chlorine to maintain sterilization through sometimes questionable distribution lines. Due to non-existence of organic compounds after ozonation, THMs are not being formed and the low free chlorine residual will dissipate when water is left in a fridge for a couple of hours.

Another very serious concern with surface water sources is the presence of Giardia and Cryptosporidium. These protozoa live in the intestines of infected wild animals, and surface water supplies are contaminated from their feces. In British Columbia, Canada, 60% of all water-borne disease outbreaks in the last decade were attributed to Giardia. It is therefore essential to address this organism when offering a complete water treatment package.

For proper and the most economical water treatment we propose:

• Pre-treatment with Ozone to remove organics and to precipitate iron, manganese and Hydrogen Sulfide. Here we supply enough ozone also for reaching the disinfecting levels of ozone residual in order to eliminate all pathogens.

• Followed by filtration to remove the flocks of organic material.

• Depending on the size of the distribution network, either re-ozonation or a chlorine residual of 0.2 ppm. It has been experienced that in communities up to about 1000 houses the distribution is usually in good shape or easy to repair, and secondary chlorination is not needed, if the same procedures are followed as if chlorinated. This is to take bacteria test-samples from all branches each three month. If there is zero bacteria count, no chlorination is required. The best results are when the reservoir is maintained at 0.03 mg/l residual ozone. This level is not a concern when supplied to the houses. Once in a few years the distribution can be shock-treated in organized event with larger amounts of ozone while by-passing the reservoir. This method is much safer then shock-treatment with chlorine bleach of course as accidental drinking of water with even very large amounts of dissolved ozone does not posses any threat to human health.


Treatments involving ozone will leave desirable levels of dissolved oxygen in the treated water. It naturally happens to be that oxygen provides 90% of water superior taste. The oxygen content in water is important as it enters the digestive system where oxygen from breathing does not enter, thus supporting friendly aerobic digestion and preventing pathogenic fermentation process. This is why in Europe a minimum of 10 mg/l of dissolved oxygen is required in the public drinking water supplies.

The cost of the finest quality drinking water system will be inversely proportional to the number of people using the system. Generally speaking, a system supplying about 1000 people could be about ~ $350 per household for the capital expenditure. The average annual operating cost would be ~ $50 per household. The numbers will vary based on the source water quality and elevations. Presently, the cost of installing this high quality water system for a single household is anywhere between $3,000 to $14,000 — and even the higher amount may still be less than drilling a new well. It is much less expensive where communities get organized and willing to spend much less per household with centralized ozone treatment. 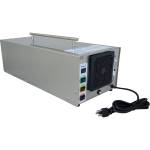